The Isleham Society have recently acquired electronic downloads of census sheets covering the whole of Isleham village as part of the national censuses carried out in 1841, 1851, 1861, 1871, 1881, 1891, 1901 and 1911.  These are the only census reports currently available (earlier censuses in 1801 to 1831 did not include names; later census reports have not yet been released).

For those interested in finding out about their ancestors who lived in Isleham between 1841 and 1911 – please see the attached list of over 14,500 names, with ages and address details, taken from the relevant census sheets.  If you would like a digital copy of the relevant census sheet, this can be provided (for a suggested donation of 50p per sheet to the Isleham Society)by contacting Malcolm Speirs at malcolm@imspeirs.plus.com   Please state the census year  and film number for each sheet required.  In the case of the 1911 census, very similar film numbers were used for different places, so these have been distinguished from each other by the description “1911” or “1911/1”.

Please note that very little information is given in the 1841 census sheets.  Although each household is shown separately, the relationships between the members are not shown.  All later census sheets generally show the oldest male as “head” of household and the relationship of others to him – e.g. “wife, dau, son, niece, mother, servant.”  Another problem with the 1841 census was that ages given are only approximate.  Whilst children’s ages are given to the nearest year, the census takers were instructed to report ages of adults “rounded down” to the nearest five years – e.g. 20, 25, 30, 35.  Also in 1841 the place of birth was not specified – there was just a column with the question “whether born in same county?”  Later censuses give the precise place of birth.  Sadly there is also a problem with the images for 1841 census.  The images (from “find my past” website) include two pages, but the left-hand page has not been fully included, so that the place is not shown and the name is partially obscured.   See the example attached.  This has meant that it was necessary either to guess the person’s Christian name (e.g.  “abeth” is assumed to be [Eliz]abeth) or if a guess is impractical, the sex is recorded as [male] or [female].  An asterisk has been placed in the “Address 2” column to indicate 1841 left hand pages.

The 1911 census sheets certainly give the most information for any particular household.  In 1911 one sheet was reserved for each household, to be signed by the “head” and including the postal address.  Any married women had to state how many years they had been married, how many children they had born alive, how many remained alive and how many had died.  This is particularly important information as it is possible to “miss” children who were born and died during the ten years between each previous census.   This census also gives more information about place of birth, particularly ensuring that those born in the British Empire showed the name of the dependency, state etc and that anyone born in a foreign country stated their nationality.  Before 1911, each census sheet includes several households, with between 25 and 30 lines per sheet.  Some households in these earlier censuses “overlap” between the bottom of one sheet and the next. 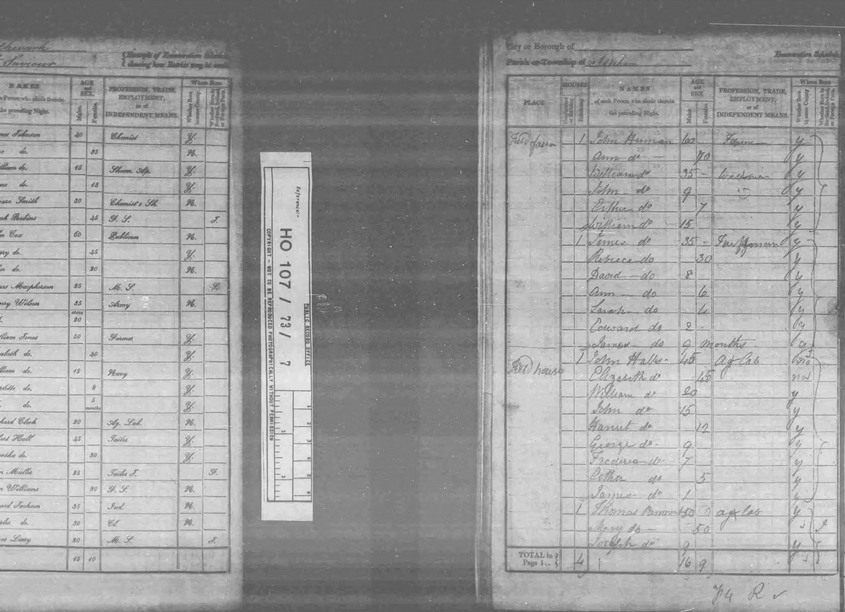 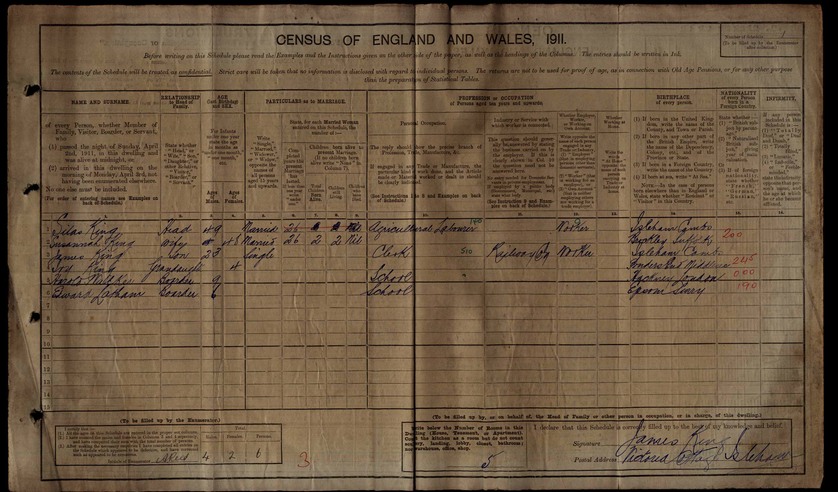